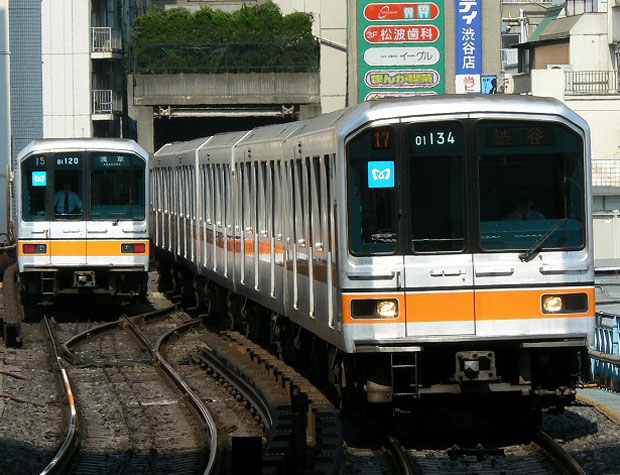 Super Subway: Tokyo's Ginza subway line is part of a trial to test what improvements silicon carbide circuits can make to transportation systems.

If you rode the Ginza Line, Japan’s oldest subway line, in the past year, chances are you took part in the testing of a technology that could drastically boost the efficiency of rail systems. Since February 2012, one of the cars in a six-car train on that line has been equipped with a new kind of inverter, part of a circuit that turns the third rail’s direct current into the alternating current that the train’s motors need. The inverters are made from a material—silicon carbide—that the makers of power electronics are hoping will start a revolution.

Silicon carbide (SiC) has a number of advantages over silicon, among them a wider energy bandgap that enables devices to run at temperatures as high as 600 °C; a breakdown voltage about 10 times that of silicon, making the material robust enough to withstand very high voltages; and high thermal conductivity, allowing it to handle enormous amounts of power. All those properties make SiC especially attractive when engineers must design systems that efficiently convert AC into DC, regulate voltages, and control motors.

Cree in the United States, Rohm in Japan, and Europe’s Infineon are the names most often associated with the still-small SiC device market today, but now fresh competitors are aiming to join them. This has market researchers forecasting sales soaring from millions of dollars into billions over the next several years. One of these newcomers, Tokyo-based multinational electronics and electrical equipment manufacturer Mitsubishi Electric, is responsible for the Ginza Line experiment.

On the Ginza Line, one of the cars was equipped with a pair of SiC inverters housed in one compact unit roughly 40 percent smaller and lighter than the silicon-based system it replaced. Each inverter controlled two 135-kilowatt induction motors; two other cars retained their old silicon inverter systems.

“Between the end of July and August 17 last year, we recorded a 38.6 percent energy savings compared to a conventional system,” says Hirotoshi Shiratori, head of Mitsubishi’s transport systems engineering section. “This included the increased regenerated power from a new regenerative braking system that is also part of the installation.” In this case, the train's kinetic energy is converted to electricity and fed back into the rail system. “Compared to 22.7 percent regenerated power of a conventional system, the SiC system returns 51 percent,” Shiratori explains. After a year of testing, Mitsubishi is now ready to commercialize the technology and has received 14 orders for systems from domestic customers and 113 orders from overseas.

The company is also preparing a train energy-management system that will store regenerated energy in an onboard battery unit on the railcar. Takashi Kimura, senior manager of Mitsubishi’s transport systems division, explains that this setup will operate when other trains on the line are not available to take advantage of the regenerated energy. “In such cases, the regenerated energy can be used by the car itself,” he says.

The technology is part of a station energy-management system that Mitsubishi is readying. This will enable a station supervisor to optimize use of the railcar-regenerated energy and make it available for both passenger use and for station lighting, air-conditioning, elevators, and the like. Kimura says both these management systems are now ready for installation, adding that the concept will eventually be expanded to include an “entire railway network.” This would include wayside regenerative energy storage sites, substations, and a control center commanding an information network that distributes the energy where it can best be used throughout the rail system.

Rail systems are not the only application for which Mitsubishi is using silicon carbide. It has introduced an air-conditioner model with an SiC inverter that reduces power consumption, and also several motors for industrial use that employ SiC controllers. In addition, it has begun testing an inverter for elevators and is developing inverters for electric vehicles. In February, Mitsubishi announced a prototype large-capacity all-SiC power switch rated at 1200 volts and 1200 amperes; the company claims it provides the highest performance in the industry. The switch achieves a 75 percent reduction in power loss, which means it needs only half the cooling equipment usually required, Mitsubishi says. The target applications are factory automation equipment, elevators and escalators, and solar-farm and wind-farm control systems.

To supply its needs, Mitsubishi invested 3.5 billion yen (about US $36 million at current exchange rates) in 2010 to build a manufacturing line capable of processing 3000 100-millimeter SiC wafers per month. The company began shipping samples to outside customers in July 2012 and says it will move to 150-mm wafers when it is ready to mass-produce.