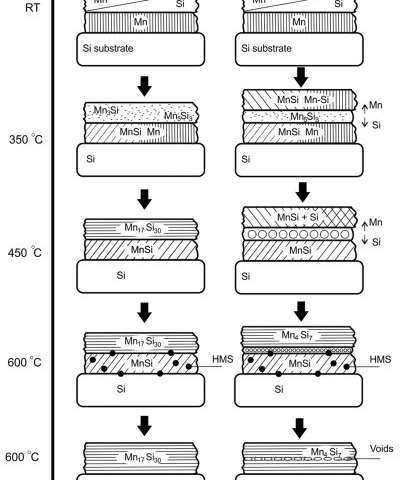 A team from Kirensky Institute of Physics (Siberian Branch of the Russian Academy of Sciences) together with colleagues from Siberian Federal University have offered an approach for the controlled synthesis of semiconducting higher manganese silicide thin films. The films may be used in thermoelectric converters and other devices. The team also suggested other areas of application for these materials. The results of the work were published in Journal of Materials Science.

Higher manganese silicides (MnSi~1.75 ) are a group of manganese and silicon compounds with an exotic crystal structure called "chimney-ladder." Manganese atoms form the chimney itself, and silicon is shaped similar to helices. Compounds attributed to this group differ from each other by the twist of helices. In Mn4Si7, the most famous member of the group, manganese is less twisted than in the other 11 phases known. Still, the twist maximum of helices in such a structure is unknown, as well as the means of targeted synthesis of a particular structure belonging to the group.

Two phases of higher manganese silicides were selected for targeted synthesis: Mn4Si7 with the least and Mn17Si30 with the most twisted helices. Like the majority of well-known higher manganese silicides, the first phase has p-type conduction. When the substance is heated, its covalent links are distorted, and free electrons start moving around. This creates holes that move in the direction opposite to that of the electrons. The second phase shows n-type conduction. In this case, the free electrons are the charge carriers.

"In this work, we used an unusual approach to the synthesis of samples. We assumed that if higher manganese silicides uncontrollably form from the amorphous mix, their formation from the mixtures of phases of other manganese silicides with higher manganese content shall differ as well for different phases. Whatever the elements on the silicon base, a compound from the higher manganese silicide family will always be the last stage. Having conducted some simple thermodynamic calculations, we found out what should be placed on the base for Mn4Si7 and Mn17Si30 phases to form," explained co-author Ivan Tarasov, a research fellow at the laboratory of the physics of magnetic phenomena, Kirensky Institute of Physics (Siberian Branch of the Russian Academy of Sciences).

The scientists decided to implement this idea and obtained the targeted structures. Afterward, their physical properties were studied as well. The n-type conductivity of Mn17Si30 was not confirmed. Theoretical calculations showed that the reason might be silicon vacancies, i.e. the absence of atoms in the places where they are expected to be in the Mn17Si30 crystal structure. The team registered the highest charge carrier mobility in higher manganese silicide films.

"After studying the properties of the new phase of higher manganese silicide we obtained quite interesting results. Most importantly, the approach we developed for synthesising such films proved to be effective. In the future, we will improve it to obtain different silicides with the properties required for use in actual thermoelectric and photovoltaic devices," concluded co-author Anton Tarasov, senior lecturer at Siberian Federal University.